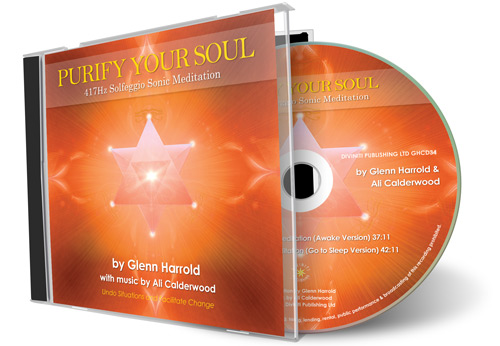 Resolve past traumas and facilitate change for a wonderful life.

This is the second of a series of six sonic meditation recordings by Glenn Harrold and Ali Calderwood, which are based upon the ancient solfeggio musical scale. Each note in this scale has specific healing properties and this recording uses the second note, which resonates to a frequency of 417hz and is associated with the colour orange and the element of water.
RRP:
NZ$ 29.95
Price:
NZ$ 14.50
CD33

This particular frequency works to dissolve emotional patterns and imprints from the past and facilitate positive changes.

It will also help to clear other emotional patterns, such as low self-esteem, self-rejection, overindulgence, jealousy and emotional instability, all of which exist within the same vibrational energy. It has been said that the solfeggio tones can even help to release blocks and traumas from past lives.

Glenn Harrold's skilled vocal delivery and guided meditation combined with Ali Calderwood's deep and moving soundscapes tuned to 417hz combine to create an amazingly powerful meditation recording that has the potential to clear away blocks on a cellular level. Listen now to resolve past traumas and facilitate changes that will leave you feeling lighter and free of old baggage.

There are two audio tracks on this recording, the first has a wake up ending for daytime use, and the second has a go to sleep ending which is ideal for bedtime use.

About the Ancient Solfeggio Scale and Healing Sounds

Emotions and mental states also have their own optimum resonance and with the recognition that every organ, and every cell, absorbs and emits sound, we can therefore understand how specific sounds and frequencies can be used as powerful healing tools. This is how the ancient Solfeggio frequencies work and is why the Gregorian monks used this specific scale for chanting and healing.

These incredible tones each resonate to specific frequency that our original blueprint is composed from. Exposing ourselves to these frequencies helps to bring our bodies, cells and DNA back into balance. Different parts of our bodies and organs all have specific frequencies of optimum resonance (perfect state of health), and therefore listening to these tones allows the body to absorb and remember (know) its original blueprint, moving it back towards its prefect state of alignment and resonance (health).

The music with this series of mediations has been specially crafted and precisely tuned to transmit each of the solfeggio frequencies. By combining these sounds with a guided meditation, you also have the potential to release deep-rooted blockages. These compositions also contain an array of sacred instruments and sounds such as crystal bowls and didgeridoo and sacred chants, which work to further enhance the effects of the Solfeggio tones.

Glenn Harrold and Ali Calderwood acknowledge the pioneering work of Dr. Joseph Puleo and Dr. Leonard Horowitz in decrypting the ancient Solfeggio and advancing Healing Codes for the Biological Apocalypse and 528Records.com.

Glenn Harrold
Glenn Harrold is one of the worlds most successful hypnotherapists. He has helped thousands including many celebrities in a 20 year career and has sold over 6 million hypnosis CDs and downloads. His hypnotherapy titles are well established as the UK’s best selling self-help CDs and downloads of all time and consistently top the self-help audio charts on Amazon, iTunes, Audible and Apple’s App Store. In May 2011 he was made a Fellow of The British School of Clinical Hypnosis in acknowledgement of his achievements in the world of hypnotherapy.

Ali Calderwood
Ali is an accomplished musician and producer, whose compositions contain illuminating depths of harmonic sound. His work is highly influenced by 15 years of immersion in ancient ways of shamanic knowledge, and the development of new approaches for modern day healing. Ali is recognised as a skilled shamanic healer, and now with 7 albums under the name of Anima, his work with sound has received international acclaim for its profound effect of aligning the listener with the higher states of consciousness. For more information visit his website - www.animacreations.co.uk