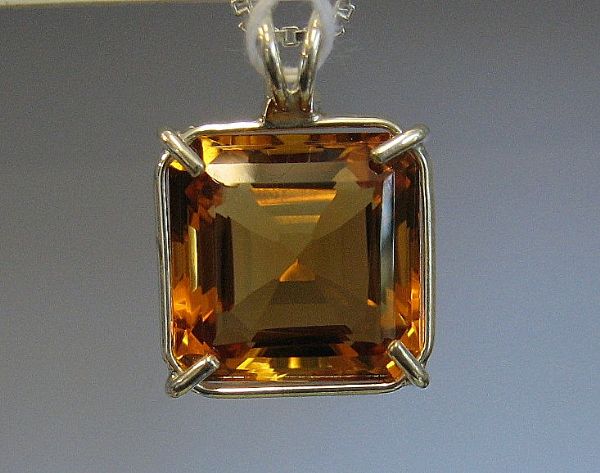 This unusual and beautiful new pendant from one of our suppliers has been named Earth Heart Crystal because of its ability to create a "peaceful refuge in alignament with the deep and pure Heart of the Earth, revealing lessons in Oneness and facilitating humanity in achieving global consciousness." When we first worked with this pendant, before the designers had come up with a name, I named it the Medicine Wheel because in working with it, I felt a strong connection to Native American traditions as well as a sense of deep protection, calm & access to my own Higher Wisdom, as well as being connected to a long line of Wisdom Keepers.

This lovely piece is perfectly clear with four planes of facets which converge to a central point imparting both a sense of stability and a sense of being centered. I would recommend this piece to anyone for Protection, Clarity, Inspiration or anyone doing Lightwork or Healing work.

Gold – Gold Ray, Christ Consciousness: Powerful balancer. Balances the male and female aspects as well as left and right brain. Stimulates the solar plexus and increases willpower and the ability to bring your creative vision into positive manifestation. Aids in connecting to higher self, accelerates the development of psychic abilities. Programme it to bring you all that your heart desires.

Helps to dissolve former misuse of will or aggression that has had karmic effects.