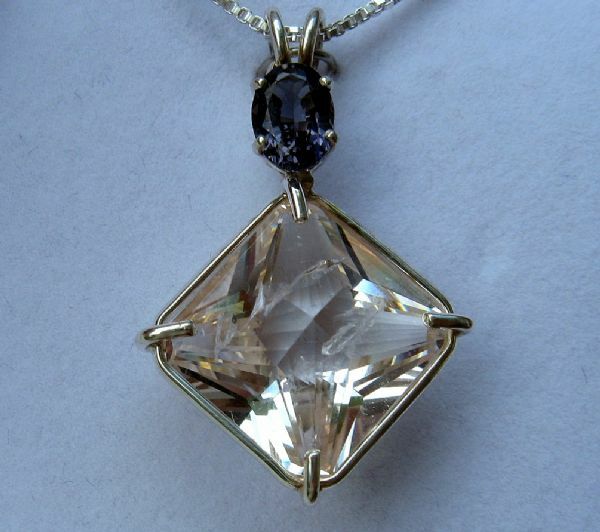 Multi-faceted star, showing 4-fold symmetry. This unique cut creates numerous energetic channels that connect us the source. Has a centring effect. Facilitates a cosmic flow and helps us to manifest magic, good luck and extraordinary abundance. The numerous facets create an energetic template establishing numerous energy channels that connect the wearer to Source, to the Earth, and to each of the four directions. Once these connections are established and strengthened it teaches us how to centre ourselves in our most beneficial position. Indeed it positions us in the Cosmic flow of energy that brings magic to life, an excellent tool for learning how to co-create in the best way. Wearing this stone brings both extraordinary luck and abundance.

WHEN WE STEP INTO THE COSMIC FLOW ALL LIFE BECOMES FILLED WITH MAGIC!

Violet Spinal brings out inner beauty and encourages our gifts. "Stone of immorality".

Mounted in Silver with silver chain.