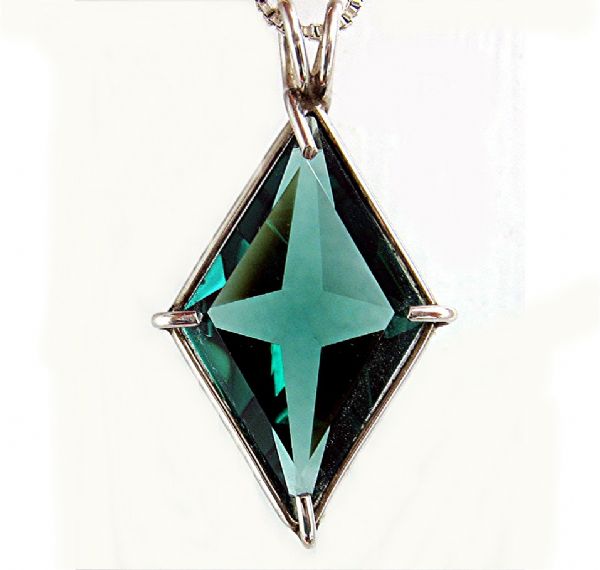 This exciting cut shows beautiful 4-fold faceting which appears as a cross or star. and lends itself well to combining the additional energy of faceted stones -- creating unique power pieces.  This is what this cut is about. The energy program of the cut focuses on easing our ascension process. It helps to lay a solid foundation for the "heart of the Christos" to thrive and grow.  Guided by this Divine energy we move into harmony and participate in "conscious evolution" "ascension" where we are no longer bound to the earth out of necessity, but out of joy and love -- Celebrating Life!!  To wear this cut is to assist in the dawning of a new ages where we live in and from the heart.  It is best worn at the heart or over the Thymus.

All Siberian Quartz is laboratory grown. They began with natural, Clear Quartz as a seed, so this quartz carries the primary Probability Wave of natural quartz. The colour is in solution the seed is placed in, so all the colour is throughout the stone. The main difference between natural quartz and Siberian Quartz is the laboratory quartz, because it is grown so quickly, it has no memory, therefore, it must be worked with, charged, or programmed. Most people find Siberian Quartz to be powerful and very interesting.

Green – Heart, Healing: Activates the heart chakra and expands throughout all the bodies. When consciously directed, is very calming and bathes one in a healing energy. Extremely powerful stone that brings in a strong love vibration to heal the heart and emotions. Particularly useful when worn to harmonize disputes. Creates prosperity and abundance, considered a lucky stone for matters of health, love & money. Beneficial for: heart, emotions, lung conditions, altitude sickness.